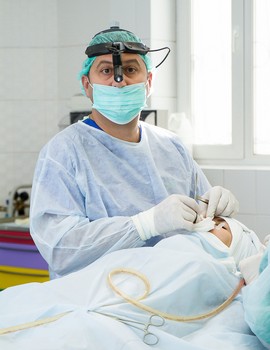 During 21 years already, famous plastic surgeon Doctor h.c. of RANS, Candidate of medical science, Tigran Albertovich Aleksanyan performs successful surgeries on reshaping the nose form and restoring nasal breathing. With the help of safe methods of surgery, he eliminates deformations of different origin, performs secondary rhinoplasty, performs correction of the tip of the nose and solves other esthetic problems for his patients. Hundreds of successful surgeries of different degree of complexity attest to surgeons highest professional abilities.

Tigran Albertovich was an intern as an ORT medical student and a postgraduate student at Moscow SPC of otolaryngology of Moscow Healthcare Department. Doctor Aleksanyan constantly takes place in the international conferences, symposia and courses on rhinoplasty and endoscopic nasal surgery. He is an author of many scientific articles, devoted to this fields of modern reconstruction medicine. Tigran Albertovich is one of the prominent plastic surgeons in Russia.

Rhinoplasty is a surgery, aimed at eliminating inherited or obtained in a lifetime defects of the nose: functional (normalization of nasal breathing) and esthetic, including complete restoration of the nose with the absence of such. This procedure, without any exaggeration, is among the most demanded ones in plastic surgery, help of which is sought by many people all over the world each day, wishing to regain their attractiveness or to benefit their appearance.

Photos of rhinoplasty before and after surgery 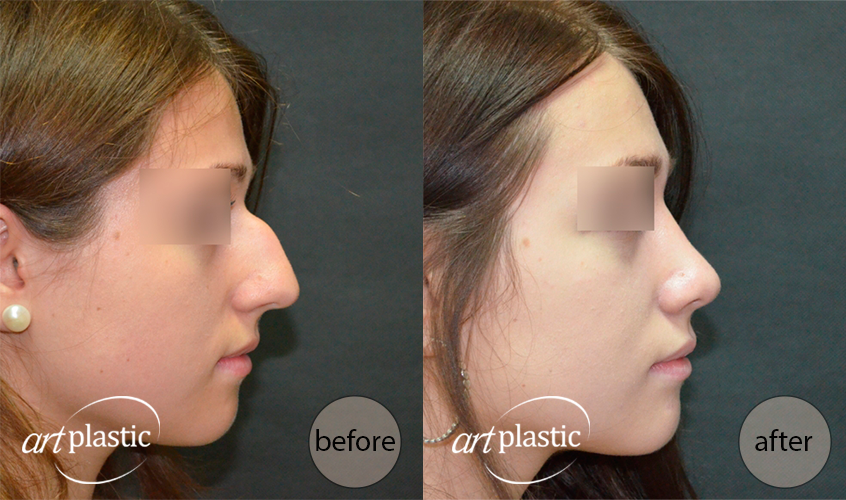 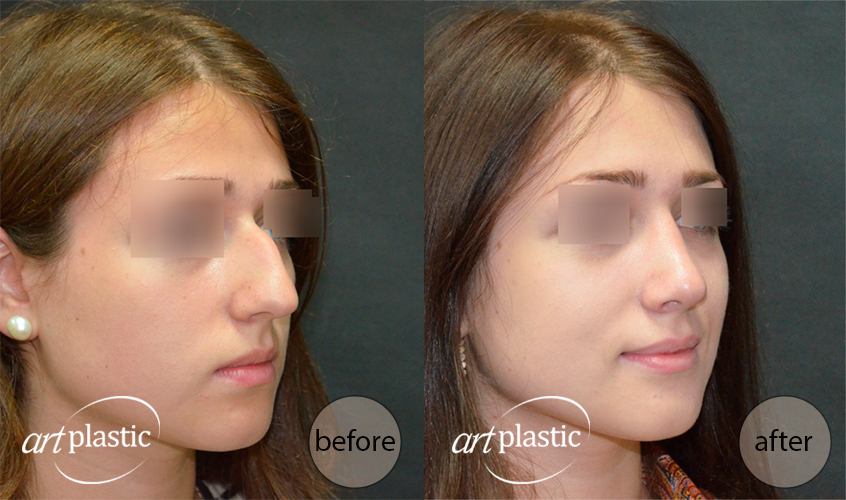 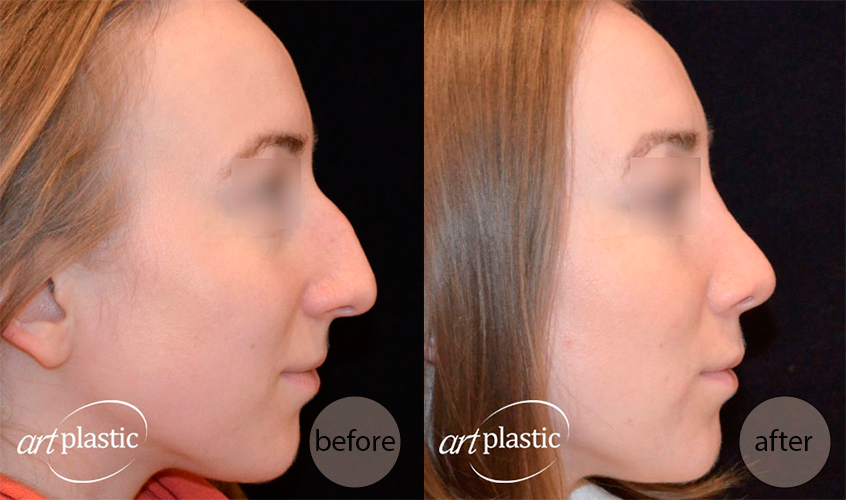 There are rather many defects of the nose, for which people use rhinoplasty surgery. It is common to divide them into esthetic and functional. The first have the aim of restoring the form and the length of the nose, while the second are aimed at solving the problems with difficulties in nasal breathing. 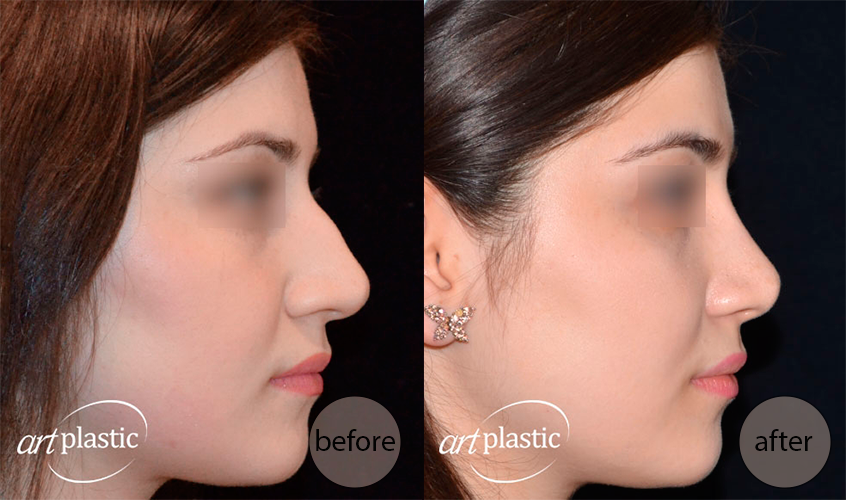 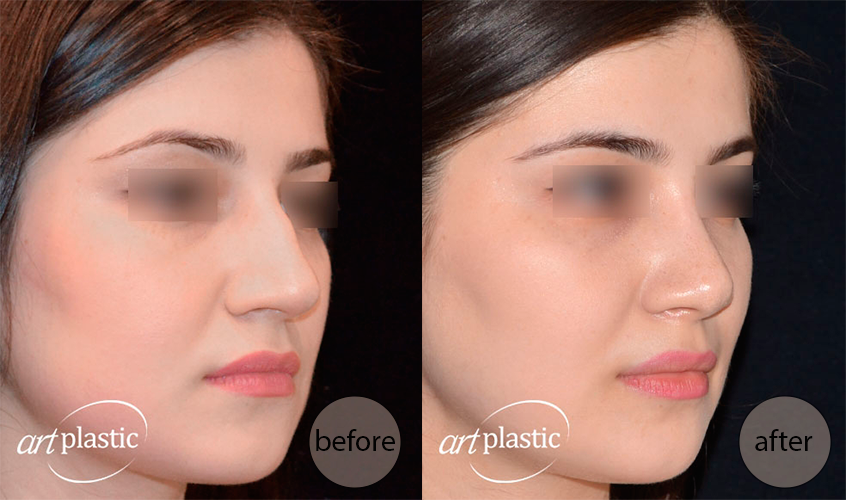 Rhinoplasty is performed in case of the following nasal defects:

Contraindications to performing rhinoplasty, if such exist, may have negative impact on surgery outcome, both in the course of surgery and in the rehabilitation period. So finding out about contraindications is a very important issue at the stage of preparing for the surgery. Contraindications may be subdivided into absolute and relative ones.

Already at the stage of planning both the patient and the doctor should know exactly what result of surgery they expect. In the course of the primary consultation the nasal area is being evaluated in different projections. Symmetry of the nostrils is being assessed, angle between nose and the lips, and the appearance of the septum. Besides all these parameters, disturbances of nasal breathing are being evaluated and traced to their causes. Also, the condition and quality of the skin tissues is of great importance. For example, if the skin is dense and fatty, it has a tendency of forming connective tissues in the dermal layer during the rehabilitation period, and that would lead to making the tip of the patients nose more round-shaped after the surgery.

Computer modeling helps getting the real idea about the results of the future surgery. It shows already at the preparation stage how the nose would look like after the procedure. Also, preparation includes undergoing the necessary examinations to find out about possible contraindications.

In the curse of the second consultation the surgeon shares with the patient information and answers the questions. After the decision about the surgery has been reached, the exact aims of the future surgery are being defined.

It is important to know about the limitations, set up for the preparation period: tobacco smoking should be stopped completely, as well as the use of any drugs that interfere with blood coagulation.

It should be noted, that modeling of the nose before rhinoplasty is done for free at the office of Tigran Albertovich Aleksanyan!

Most commonly, rhinoplasty is an outpatient procedure. The surgery is conducted with general anesthesia or if it has contraindication, under the local anesthesia. When local anesthesia is being used, before the surgery, cotton swabs with anesthetic agent, which is chosen after conducting allergy tests, are being placed in the nostrils for some time. In case of general anesthesia this manipulation is omitted. Main requirements to anesthesia, according to specialists, are comfort and safety for the patient during the surgical intervention.

After the procedure, fixating bandage is placed on the nose area. Patient has to lay down for 2-3 hours with head in upward position. This time is usually enough to stop bleeding and to end the action of anesthesia.

Acceptable symptoms after the surgery are moderate pains in the place of surgery, spreading to the upper jaw. Primary swelling usually keeps for 1-1.5 weeks. Remaining swelling lasts longer, 2-6 moths, but it would hardly be noticeable to others.

It is strictly prohibited to scratch the nose or to blow the nose in the first days after rhinoplasty, because this may cause secondary bleeding. Blood clots should be removed no earlier than 2-3 days after the procedure.

Usually, the patient is discharged from the clinic the day after the rhinoplasty surgery, however, he still needs to be under the supervision of the doctor during the period of rehabilitation, which lasts for about a month. During this time, physical exercises should be excluded, as well as smoking and intake of alcohol. It is compulsory to follow the scheduled visits to the doctor, which are done after 3, 6 and 12 months after the surgery.

Form of the nose may be changing during the rehabilitation period, so the final evaluation of the obtained result is possible only after 6 months after conducting the rhinoplasty. The length of rehabilitation period is in direct connection with the amount of surgical intervention, and with individual reactions of the patient's organism.

As we said earlier, the first open plastic surgery of the nose was performed and described by the Indian doctor Susruta back in VII century B.C., and over the course of centuries this method was excelled by different schools of surgery. But the basic essence of the operation remains unchanged even today. Its performance begins by making outer cross-cuts on the columella - fold of the skin, dividing the nostrils - and on the outer nasal folds, in order to push the soft tissues away and get access to the inner cavity.

Open rhinoplasty is used for correcting very severe defects, which require immediate access to the bones and cartilages of the nose. The scar after the surgery over time becomes unnoticeable, however, the rehabilitation period after such surgery is very long, as the procedure is very traumatic, due to damage to the vessels going to the tip of the nose. That's why open rhinoplasty is not commonly used. Sometimes it is also necessary to conduct it after the unsuccessful rhinoplasty surgeries, performed by poorly skilled surgeons.

In our clinic we use a much less traumatic, although more technically complicated method of nose defect correction, which is a closed rhinoplasty. This method means getting access to the nasal cavity without making the outer cuts, from the mucous layer side via the nostrils. The skin is being cut and if there is unwanted tissue it is being removed. If it is necessary to fill in the volume, the aim is reached by placing the implants. The use of this technique allows to avoid outer post-surgery scars and significantly shortens the rehabilitation period. Because of its great esthetic result this method is more popular with the patients, however, for the surgeon the method is more complicated, ant requires high degree of professional skill. 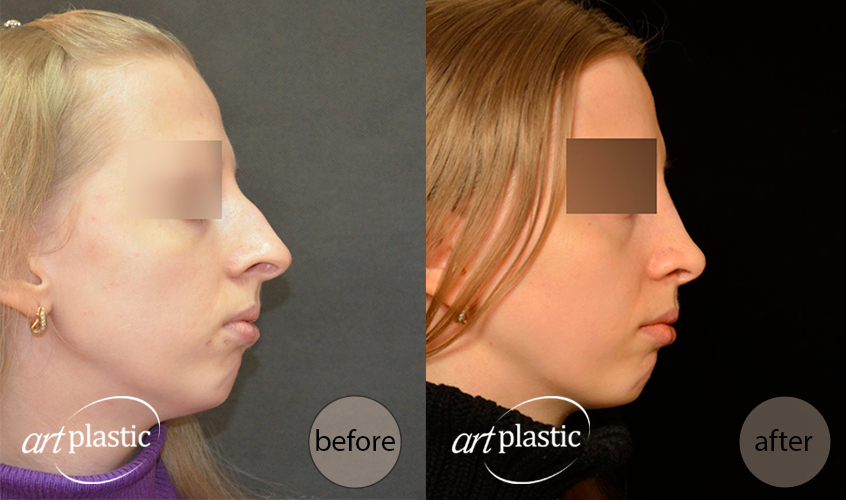 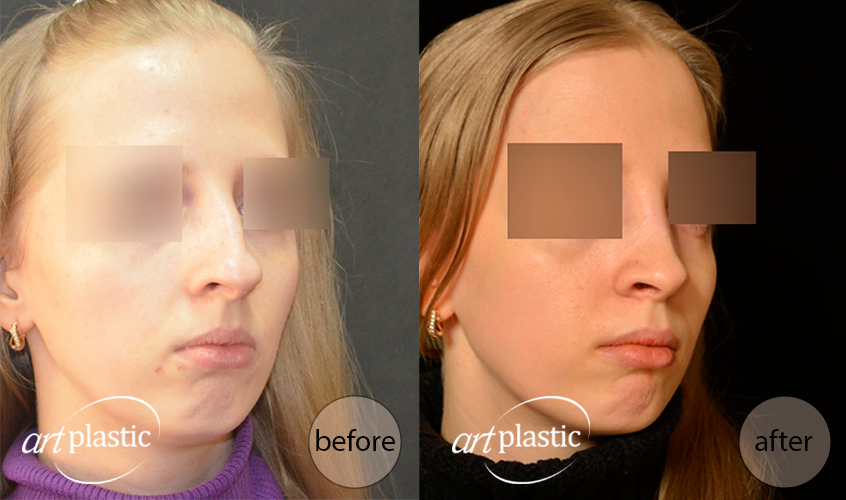 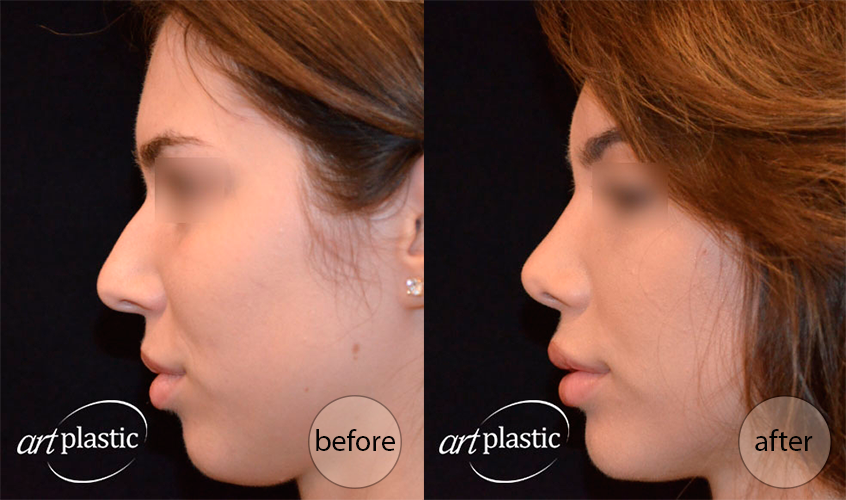 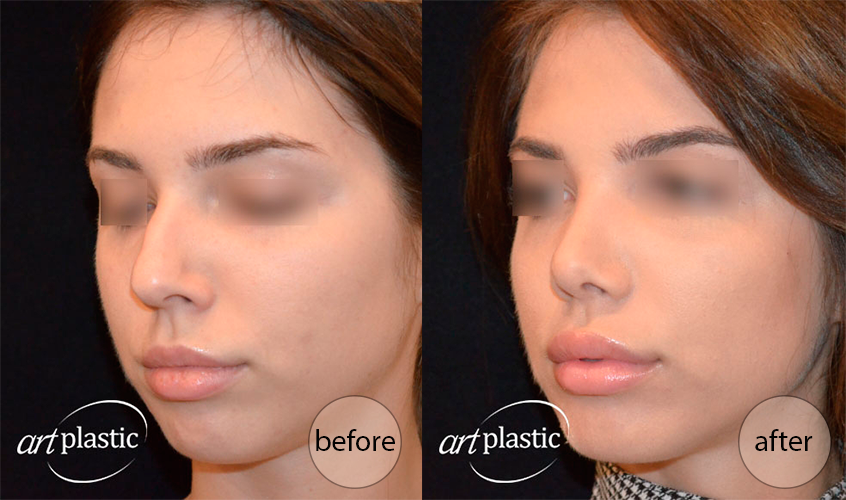 This type of rhinoplasty may be performed both by open and closed technique. The choice of the exact method of access is defined by the aims of surgery and the severity of the defect. The specific feature of this surgery is that all manipulations during the surgery are performed on soft tissues and cartilages. Sometimes also sides of the nose and columella are being restored. Most commonly this surgery is done in cases of fat or long nose tip, and also split nose tip. It is important to realize, that cutting off too much tissue in this case may cause negative results. That's why the specialist making the nose tip correction should have a great experience in conducting plastic surgeries and have an individual approach to each clinical case.

Secondary plastic surgery on the nose is problematic both for the patient and for the doctor, both from surgical and from the psychological point of view. This is not surprising, because as a result of unsuccessful nose correction surgery the patient is disappointed in the surgeon and in the results of his work. Often even when the patient contacts other specialist to conduct the secondary rhinoplasty, the new doctor has to deal with anger of the patient and his fear of another failure, and even guilt.

Unsuccessful nose reconstruction may have such outcomes as forming of significant scars, growth of connective tissues, changes in the elasticity and other defects. The amount of intervention in secondary rhinoplasty may differ from the very insignificant to very large. To eliminate small humps and uneven surface small revision in performed, while if the transplants are being used, the deep correction would be necessary, requiring big exposition via the open access to the inner nasal cavity.

The necessity for secondary nose reconstruction may be due both to badly performed original surgery, or to individual reactions of the patient's organism. In any case, secondary surgery may also cause the growth of the scar and connective tissue, leading to unwanted results. That is why already at the stage of preparing for the first rhinoplasty it is extremely important to find the highly professional surgeon with a great work experience.

This article in other languages