Difficult nasal breathing is associated with obstructed flow of air through the nasal passages deeper into the respiratory tract. One of the frequent causes of difficult breathing is rhinitis (acute or chronic). 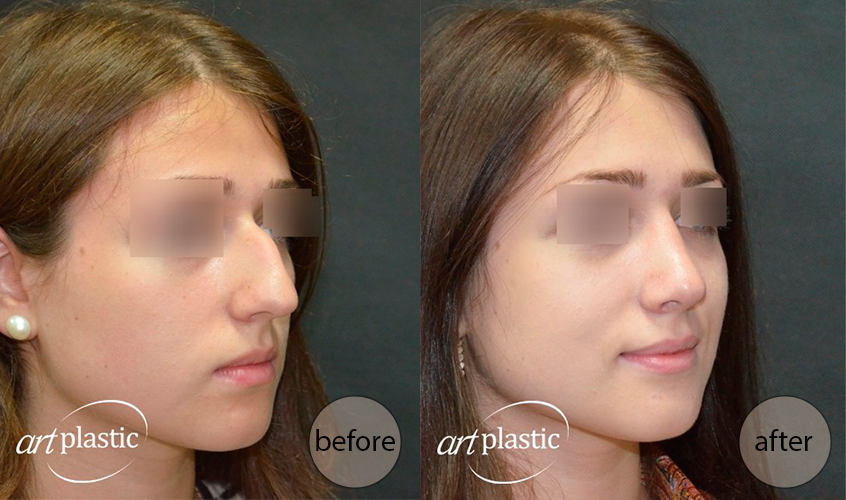 Acute or chronic rhinitis and nasal breathing impairment can develop for the following reasons:

Rhinitis treatment methods can be divided into therapeutic and surgical.

However, quite often chronic rhinitis is associated with the individual anatomic features of the nose. In these cases, surgical treatment including rhinoplasty helps to effectively combat frequent rhinitis.

Symptoms of functional airway obstruction include nasal congestion, breathing through the mouth (especially at night), dry mouth, and decreased sense of smell. The side effects of chronic nasal congestion may include nosebleeds, recurrent sinus infections, headaches with a sense of pressure in the sinuses, eustachian tube dysfunction or sleep disturbance. In the absence of treatment, these symptoms eventually lead to more severe manifestations of chronic nasal dysfunction including insomnia, hypertension, obstructive sleep apnea or even heart diseases.

Rhinoplasty without changing the external shape of the nose

In uncomplicated cases, functional nose surgery involves surgical treatment of the internal nasal passages without altering the appearance of the nose. Such surgery includes nasal septoplasty, reduction of nasal turbinates and removal of nasal polyps.

The nasal septum between the passages may be bent, deviated or curved, which results in the blockage of one or both nasal passages. Septoplasty employs various surgical techniques to straighten the septum and open the blocked nasal passages. Typical uncomplicated septoplasty usually takes 15-30 minutes, and the recovery after it is quick and easy in most cases.

Dilatation of nasal turbinates, also known as hypertrophy of nasal turbinates, is another widespread cause of nasal congestion, especially in patients with a long standing allergic rhinitis. The turbinates are mucous membranes on the protuberances of the bone, which extend along the entire length of the inner cavity of the nose. On the outer wall of each nasal passage, there are three nasal turbinates: the upper, the middle and the lower. The upper turbinate is usually very small and rarely causes airway dysfunction. Some patients develop internal air pockets in the middle nasal turbinate which cause symptomatic obstruction of the airways – a deformity known as bullous turbinate. However, the most common cause of congestion of the nasal airways to date is the hypertrophy of the lower nasal turbinate. Since the main function of the turbinates is to humidify, warm and filter the inhaled air, it is not recommended to completely remove the entire tissue of the turbinate. That being said, surgical intervention in this area can significantly improve the quality of breathing.

Polyps are benign growths of the mucosa, which sometimes cause obstruction of the nasal passages. Removal of polyps is not a complicated procedure, but there is high probability of relapse.

Rhinoplasty with reshaping of the nose external structure

A nose with a deformity, curvature, or combined pathology cannot be improved only by surgery on the internal airways. In such cases, it is necessary to use various methods of rhinoplasty to straighten, dilate and eliminate the obstruction of the external nasal passages, as well as to achieve a normal shape of the nose. In this case, simultaneously with the manipulations aimed to improve the patency of the nasal passages, the surgeon can completely change the shape of the nose, remove the hump, eliminate the curvature, correct the nose tip, etc. The combination of functional and cosmetic rhinoplasty is also possible in the treatment of the condition known as nasal valve collapse.

The most common cause of obstruction of the external nasal airways is the nasal valve collapse. The nasal valve is the narrowest segment of all nasal airways. Under normal conditions, the nasal valve falls in when taking a deep breath (under physical stress), but remains open during normal nasal breathing. But if the nose is thin or damaged, has been operated on or affected by a disease or by the ageing process, the skeletal support of the nasal valve is insufficient, and the valve collapse develops. Numerous complex surgical methods have been developed to treat the nasal valve collapse, but none of them is universally suitable for all patients. The most effective treatment method must be chosen individually, with regard to the patient’s anatomical features, tissue strength and nose contour. Knowing the proper treatment and prevention of nasal valve collapse is an integral part of cosmetic rhinoplasty. Unfortunately, it is often neglected in the modern rapidly developing cosmetic surgery market. Therefore, it is necessary to take the choice of clinic and specialist for rhinoplasty seriously.